It was only a glimpse of the gigantic, global forces at play.  I was being drawn out by the backflow of the surf – the great suction of the outgoing tide plus the strong downstream current of the river.

Conflicting currents caused eddies where I could remain stationary, motionless.  The conflicting currents were actually spinning me around.  I recognized it was imperative that I get to the shore before the strength in my arms completely gave out.  So I got across the stream to the other side and beached my kayak.  I realized this was the only way to get across at the moment, due to the high level of the swift torrent; I was the only person there.  Just animal tracks in the sand.

Then the brief rain started.  I picked up my kayak, balanced it on my head, and walked upstream to put in again.  So I rode the current out, and came back in on the surf.  Simply upstream and back down again; back and forth. 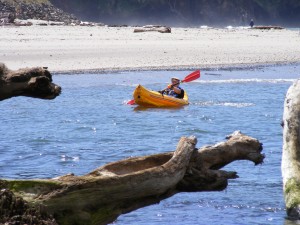 This is the month to resume kayaking.  Now I have my own PFD, paddle, and an inflatable kayak – I was ready to go.  My inflatable kayak is the Sevylor Tahiti K 79 Classic (which a friend has loaned to me).  When my wife suggested driving to the coast for the day, I decided to bring along the kayak in case I had a chance to try it.  Check out the pix of this kayak outing at my Flickr photostream –

However, the Sevylor Tahiti has too much surface contact with the water, creating a lot of extra drag, rather than a sleek, fiberglass recreational kayak that I was used to.  It wasn’t worth the effort of paddling upstream.  Also, I was sitting very low, making it hard to paddle.  I tried it on my knees, canoe style, but my center of balance felt too high.  I eventually learned I could lean back – on the inflated “back rest” – and take it easy.  But it was not the relaxing style of kayaking that I was used to.  In reality, it was a little frightening to feel the awesome, uncontrollable power of those global forces, against which I could not compete.

So I took a break from the kayaking to rest.  My “break” became permanent for the day.  I changed out of my wet clothing.  There is a very nice changing room facility at the Neskowin Wayside.

We strolled along the beach and discovered odd things washed ashore by the somewhat-recent tsunami.  I found the case for a knife with a foot-long blade, right next to a demolished tennis shoe that had traveled thousands of miles.  I found a unique piece of “driftwood:” a round leg that had been shaped on a lathe for a tall barstool.  Not long afterward, I found the large barstool with one leg missing.  The tsunami was also one of those gigantic, global forces – one that spanned the entire distance of the Pacific Ocean.

We observed the way of nature, too.  While we sat in our chairs on the beach, a solitary seagull landed in front of us, and limped a little closer.  His right leg was only a stub; the foot was missing.  Soon a small group of seagulls arrived.  Immediately they called out loudly to the outcast who had arrived alone, and he flew away.  Forever an outcast.  The ADA stands for Americans, not “Animals.”

Then, before sunset, we walked back to see how the creek looked at low tide.  And we discovered an awesome phenomenon.  Another glimpse of the gigantic, global forces at play.  The actual sand shoreline was crumbling away.  Sections of the bank were cracking and sliding down.  Although merely sand, they looked like genuine stones.  Then the stream’s very fast current undermined the sections, and they were falling over, tumbling into the water, just being sucked out to sea with a minus low tide.  The bank was being reformed, reshaped, literally changed forever by the sheer forces.  It would look like time-lapse photography, but it was happening before our eyes in real time.  I drew a line in the sand to gauge the progress of the erosion; the bank lost easily a foot as we stood there and watched.

It had started with the tidal-wave surge following the Japanese tsunami.  In fact, a notice posted on the fence along the trail to the beach announced a local meeting to discuss “how our shoreline is changing.”  Indeed, the area did look very different from the last time we were there.  Now each fluctuation of the tide was etching out a new bank.

The action began to subside due to the lower tide.  Where I was kayaking in a lot of water earlier, now a rocky island was exposed in the middle.  And we had been the only ones present at the precise moment to witness the great, persistent forces involved.

Then I noticed two women walking their dogs merely 50 yards away, oblivious. 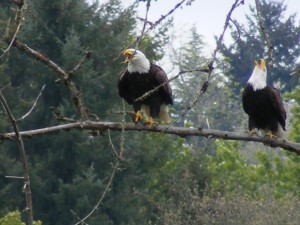 P.S.  Also, if you want to see awesome pictures of the bald eagles in my backyard, then go to this set in my Flickr photostream –

They are in my backyard because the property on which we live adjoins a natural, protected area.  This pair of eagles just showed up one day, and then we saw one of them a couple days later.  But we haven’t seen them since.

And please read the beginning of my series about the Fear of Success at leecuesta.com.  Here’s the link –