A Lunar Eclipse Not Seen Since Before The USA Was Founded

My son and I stayed up last night (slash) this morning to watch the total eclipse of the moon.  It started at 9:30 PM in my time zone.  So I went outside around ten o’clock, and at my current location, the sky was overcast and raining a little bit.  I started to walk, not seeing the moon. Eventually I turned back, with my hood over my head.  When I was about halfway back to my home, I could see the light of the moon penetrating the cloud cover, and it was about one-third darkened.  I rushed upstairs to tell my son, but when he got outside, the clouds were too dense again.  (Later, fortunately, he did get to briefly, barely see the partially darkened moonlight through the clouds.)

Instead, we watched the total eclipse by way of a live webcam.  It’s awesome how this technology allows us to observe what we otherwise could not see.  It was after 3:00 AM in the webcam’s time zone when the eclipse became total.  And in my time zone, the 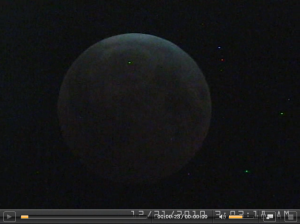 eclipse continued well past midnight.  This means that this total lunar eclipse coincided with the winter solstice, which is today.  I heard on the radio that this is the first time in 372 years that a total lunar eclipse has occurred on the winter solstice.  And I feel it is incredibly awesome to witness something that has not been witnessed since before the founding of the United States of America.

Three-hundred seventy-two years ago was 1638.  That’s way before George Washington was born.  Before Lincoln.  Before Rockefeller.  Before all of this that we now take for granted.

This entry was posted in Uncategorized. Bookmark the permalink.