Lake Roesiger: Like paddling on both a “river” and lakes in one, single outing

We finally did it!  And this is our last paddling trip for 2019.  It is the last Sunday of October, the perfect autumn day, something we experience almost every year in the Pacific Northwest:  an “Indian summer,” gorgeous summer-like days after the initial rainy autumn storms subside. There is a break in the gloomy weather, and for a week or two, the sunshine and its warmth return. You can depend on it.  Sometimes we go to a solitary beach along the Pacific Ocean.

This year, instead, we finally took our kayaks paddling on Lake Roesiger (pronounced RAW-si-gur).  What a contrast from the last time I was there! It was in January, 2017, and there was thick ice on Lake Roesiger right up to the shoreline and boat ramp, where today we are launching our kayaks. Not the entire lake was frozen over, but the southern section still had thick ice, as you can see in the video that I posted on YouTube.  Here’s the link:

Today is just the opposite:  60 degrees, clear blue sky; fall colors: red, yellow, orange leaves against the backdrop of mostly evergreens: Douglas firs and cedars.  Because the lake is uniquely configured in three sections, connected by narrower, shallow channels, I am describing today’s outing in terms of “outbound” and “inbound,” rather than merely circling the perimeter of a lake. 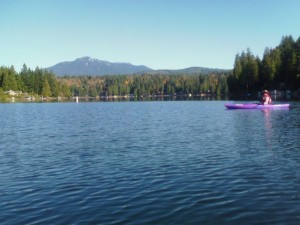 The boat launch is secluded; it is actually located on Middle Shore Road, off of S. Lake Roesiger Road, on the eastern side of Lake Roesiger’s southern tip.  This morning, as we launch, the lake is super placid; there is no breeze, and so the lake’s surface provides a bright, clear, colorful reflection. A prominent mountain peak rises in the background, to the north, which I’m not able to identify.  As we approach the northern edge of this southern section, a small house with a bright red metal roof is our landmark to head into the first slender, shallow channel, veering to the west and north. 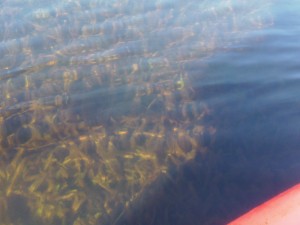 This outing is like kayaking on both a lake and a river because shallow channels — where it is easy to see the bottom, and the vegetation growing there — connect the three sections of the lake.  We see ducks flying, a bald eagle soaring, and a large flock of geese on somebody’s lawn and sitting on a long fallen log protruding into the water. Nice houses snuggle right up to the lake’s edge; however, the narrower, river-like channels are less densely populated.  In this constricted area, buoys mark the navigable channels and no-wake zones. Also, the lillypads here are dense, even at the end of October; so what would they be like in the summer?

We are the only kayakers on this outbound leg.  Entering the lake’s second section, we encounter a small fishing boat, with two fishermen.  Powered motorcraft are permitted on this lake. The northern part of Lake Roesiger, though, is the largest, and when get out onto this main portion of the northern section, the wind begins to kick up and I wonder two things.  First, what happened to the placid lake with no breeze? And second, are we going to make it safely to the other side? It is a challenge paddling in this wind, and the waves are formidable. I look back to make sure my companion is OK.

We cross all the way to the lake’s northern cove because I couldn’t remember exactly the contour of the lake, and so I don’t know for certain if this is the northernmost segment. There are two coves, to the west and to the north.  Entering this quiet cove, the water is tranquil, with debris such as leaves and fir needles floating on the surface. We can see now that we’ve reached the end of our outbound journey. As we rest here for a few minutes on this still water, we eat some of our protein snack with apple slices.

Beginning our return trip, I am briefly disoriented at first.  I realize that for some reason, I am paddling due east when I should have headed to my right, or south.  So I wind up almost at the center of the lake. My paddling partner patiently waited for me. While I am out here, though, in the middle of the lake, the darkness of the water stuns me, and I wonder how deep it is.  One website states: “The lake has three distinct areas with the center area being shallow and the northern part of the lake being the deepest, with depths to 115 feet.” 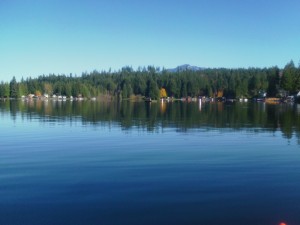 Now I put on my sunglasses, and I feel considerably warmer as we are facing the sun on this inbound leg, headed due south.  We are passed by a couple of speed boats that are going very slowly, causing no wake. I can hear their engines rumbling, and I look back to see them approaching, only crawling.  One man greets us from his house on the shore: “It’s a beautiful day to be on the lake,” he says.

Several families are in their yards along the lake; a couple of guys stand on their deck high above, grilling and laughing.  Low sunlight comes from the south; at one point, we could make out no houses on the shore, only the trees, backlit, almost in silhouette.

Then we notice something very peculiar.  At first, in the distance on the water, I can see something large with a couple of headlights coming slowly toward us. We are nearing one of the narrow channels marked by buoys.  We paddle away from the channel to let it pass. What we are seeing is this: coming in the opposite direction, it is a floating wooden dock with a small outboard motor that’s being controlled by a guy wearing a blue sweatshirt and jeans sitting on a low beach chair with his dog.  He is towing a large flat, gray pontoon party boat with a man and woman coming through this channel in the shallow section of the lake.

We see many fish jumping; earlier it looked like one of the guys in the small fishing boat had one on his line. “The lake holds rainbows, silvers, and spiny rays including bass,” according to the same website cited earlier: Lake Roesiger details 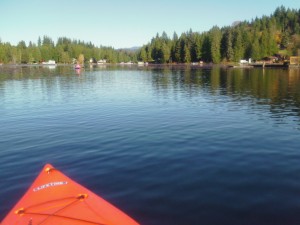 Two women are paddling in separate kayaks on the southern section of Lake Roesiger.  As we beach our kayaks beside the boat ramp, and climb out, one of the speed boats is being pulled onto a trailer.  I realize that, except for the small, fishing boat with two men, the only other boat traffic we encountered has been on this inbound trip; it has been a tranquil, solitary day.

Approximately two miles from south to north, this has been a four to five mile round trip.  We finally did it, after anticipating it for over two years. And this was our last paddling trip for 2019.  Now our kayaks are winterized, one hanging in the garage, and three others under a tarp in the backyard. There they will stay until next spring, and family get-togethers in the summer, when we’ll visit this lake again, and explore Panther Lake for the first time.   As I mentioned earlier, I think Lake Roesiger is really fun because it feels like being both on lakes and a river in the same outing.