How much different are we from them? 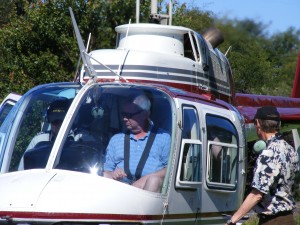 Whether enjoying a flight in a helicopter, or sitting on the beach at sunset with a fire and a guitar serenade, this is the way life should be for a Baby Boomer.

The flight was courtesy of Seaside Helicopters in Oregon, and the day was perfect, cloudless and zero haze.  In fact, as we banked and made the turn to return, we could see Mt. Hood, Mt. Adams and Mt. Rainier – all the way from the Pacific Ocean.  We could also look far beyond the Columbia River into Washington state.  Unlike an airplane, it felt exhilarating to be flying in a bubble, with almost complete visibility all around me. Also unlike an airplane, experiencing the immediate gain of altitude was awesome:  one minute we’re coasting along the corridor at the heliport beside the highway, and the next minute we have a view of the forest and coastline from 3,000 feet.

I thought my fear of heights might be a factor, but I felt no fear at all.  The only surge of adrenalin I felt was when we banked for the turn, and I shifted down to my left, as if falling.  But I recovered immediately.

My son accompanied me, and we conversed among ourselves and the pilot via the headset.  A helicopter flight had been a lifelong goal, and it was a birthday gift from my wife.  She stayed on the ground, took photos, and I could see her fluorescent, fuchsia pink blouse from high in the sky as we were flying back.  My son is also the one providing the guitar serenade on the beach. 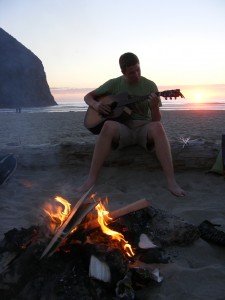 All this was facilitated by the fact that my wife and I rented an apartment in Cannon Beach from March through September.  We spent many long, lazy days tossing a Frisbee, harvesting mussels at low tide, avoiding salamanders on the trail, observing the sandcastle competition, strolling along the beach – including under the stars – and walking downtown to relax at the Insomnia Coffee Company, or to have lunch at Fultano’s Pizza.  I began to feel like a “local,” rather than a tourist.  During this time, my wife was working in Cannon Beach.

Although she moved back and we reconsolidated the two households in late September, we were once again at the coast by mid-October.  This time we drove to Newport, and we spent the night in a yurt at Beverly Beach.  We were experiencing a gorgeous Indian Summer, with warm sunshine and warm surf, yet at times we were truly the only ones on the beach!  I adore that kind of solitude!

In Newport, we enjoyed several hours at the Oregon Coast Aquarium, along Yaquina Bay.  While the keepers were feeding the otters, the spokesperson said something very similar to a statement from Shawn Finnell, senior elephant keeper at the Oregon Zoo: “We train the elephants in a lot of behaviors geared toward their care.”  They are animals in captivity, yet within natural habitats.  Most of them could not survive in the wild; many are there due to that reason.  How much different are we from them?  Later, in contrast, as we walked along the beach one last time, we saw pelicans, lots of them, soaring low over the breakers, sometimes four together, then intermingling with the seagulls on the sand, distinguishable due to their relative size, in unspoiled harmony.