“It’s more than a crucifix. It’s the entire gospel.” With that statement, Lee Cuesta announces a new jewelry creation by Enok O that is ideal for the Easter season. The medallion, primarily to be worn as a pendant, is a symbolic, wordless representation of John 3:16. Every portion of the circular pendant, measuring only 3 cm (1.25 inches) in diameter, depicts a separate phrase in the verse. “So my design includes seven segments in all – representing the seven phrases of this Bible verse – which are fully integrated,” says artist and designer Enok O. Photos of his medallion can be viewed on this page, along with a drawing that identifies each segment. The pendant is not coined, or stamped, but instead it is cut from the metal. “It is very unique,” he continues. “In fact, it’s a great conversation starter. When I was wearing it after I made the original, my friends – and even strangers – asked me questions because they didn’t understand it. So I was able to explain it to them. They said it was a cool idea, and several of them wanted to buy one.”
Inspiration confirmed by dream. “When I thought of it, I was walking to class,” recalls Enok O. “I’d thought of designing a verse with images. I had some other sketches already. Then I remembered how my Bible teacher used a shorthand for God – the Greek letter, theta. So that’s where I got the symbol at the top of the medallion, and from there it just flowed.”Then Lee Cuesta had a dream that validated his decision to produce and distribute this jewelry design. He says, “In my dream, I saw soldiers – ‘Mountaineers’ – from the 3rd Brigade Combat Team, 4th Infantry Division, from Fort Carson, Colorado. They were in the district of Adhamiya, north of Baghdad, conducting night missions, setting up barriers along the roadways.”One soldier, wearing his night-vision goggle, was helping to clear away trash and debris in order to set one of the barriers. In the sand, he noticed an object with a dull shine. He picked it up, brushed it off, and in my dream I could see that it was a tarnished pendant 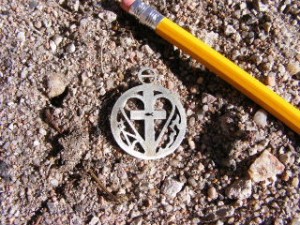 with the same design. “I felt this sense that an early Christian, en route to the city of Ctesiphon – which was located approximately 35 km (20 miles) southeast of the modern city of Baghdad – had dropped the pendant. I perceived that the pendant was an early, symbolic representation of the entire gospel, which the Apostle John later expressed in words.” So Enok O drew out his design on paper, rubber cemented it to a bare piece of precious metal, and meticulously carved it out by hand. Now the replicas are crafted using either molds or laser cut. Enok O owns the copyright for his design, which is officially registered in the U.S. Copyright Office. Licensing agreements are available.
Offered in four metals. The medallion’s design is definitely unisex, equally attractive for women and men. So with Easter fast approaching – on April 24 – “it is the ideal time to think about giving a gift,” says Cuesta, “either for someone else – perhaps a soldier – or for yourself.” Currently, the medallion by Enok O is available in sterling silver, pewter, vermeil (gold over sterling silver) and bronze. Prices range from $15.90 (pewter) to $79.84 (U.S. dollars). Enok O comments: “It’s sweet to imagine lots of people actually wearing it. John 3:16 is a beloved verse. I hope it really takes off. Can you imagine the impact – the witness – in our society if a million Christians wore this pendant that portrays the essential gospel? What an opportunity to share Jesus Christ!”

Deep discounts are available to youth groups and mission trips!

The John 3:16 Medallion, by Enok O, can be ordered by going to this website, http://leecuesta.myshopify.com. For more information, or to contact either Lee Cuesta or Enok O via e-mail, please go to http://www.leecuestalive.com/. In addition, Lee Cuesta Enterprises and Associates may be contacted by telephone at 503.784.4976.

NOTICE: For this pendant and its entire design, Enok O owns the copyright, which is officially registered at the U.S. Copyright Office. All rights reserved. Any use of this design, without specific, written permission from the artist, is strictly prohibited. Licensing agreements are available.Visual, explanatory booklet (as follows) is included with every medallion –Copyright, 2008, by Enok O.

Thank you very much!